How do turtles breathe?

Within the group of vertebrates we find the order Testudines, which includes all turtles, both aquatic and terrestrial. Without a doubt, they are very peculiar animals, because their shell, regardless of the species, makes them always easily recognizable. On the other hand, they are full of various curiosities, which with the advancement of science have become much better known. One of these data and what else raises doubts is his way of breathing. 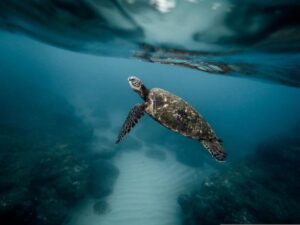 How do tortoises breathe?

The shell of turtles is a thoracic cage that has been modified and forms part of their spinal column, where the ribs have also been fused, which has the consequence that in the process of inspiration and exhalation there is no expansion of the ribcage. region of the thorax, as is common in other vertebrate animals. This anatomical constitution means that the lungs , in their upper region, are attached to the shell , while the lower part is attached to other organs. This position limits their expansion.

But life in general uses complex processes that offer necessary alternatives so that the species can develop properly, and in this the turtles have not been left out. To solve the limitation of the expansive movement of the lungs, which allows the mobilization of air, the turtles use the abdominal and pectoral muscles as if they were a diaphragm , for which they make the air enter and leave the lungs thanks to two types of movements: one that drives the air into the lungs and another that takes it out, so that gaseous exchange can occur in the animal.

Certain studies suggest that this ventilation mechanism that occurs in turtles was possible through their anatomical evolution, where there was a division of labor carried out by structures such as the ribs and muscles located in the trunk, in which Given the limitation of their movements, their function was replaced by other muscles, such as the abdominals. As for the widening of the ribs, these became the main means of stabilizing the trunk of the animal. It is estimated that this entire transformation process must have occurred about 50 million years ago, before the evolution of the shell to a fully ossified structure took place.

Sea turtles and also those that live in freshwater bodies are still vertebrate animals that, in fact, belong to the same order as land turtles. In this sense, aquatic turtles also breathe through lungs , so they need to go to the surface to take in air .

However, both sea turtles and freshwater turtles have developed other mechanisms to carry out gas exchange underwater and thus be able to take in oxygen. In general, vertebrates, regardless of the type of respiration they have, due to the metabolic demands they have on their bodies, have little tolerance for the absence or deficiency of oxygen, and for a sea turtle, for example, it would be a limitation to have to rise every few minutes to the surface to breathe. Likewise, it would also be limiting for species of freshwater turtles, which develop brumation processes under water, as is the case of the red-eared slider turtle ( Trachemys scripta).

So how do water turtles breathe? It is common for turtles with aquatic habits, whether in marine or freshwater environments, to have a bimodal type of respiration , that is, they do it through their lungs , but also through the cloaca , which is the final part of the digestive system. of the animal and connects with the outside, so that it is lined with branched papillae that allow gas exchange.

Lastly, since there are hardly any absolute rules in nature, there are turtles, such as the painted turtle ( Chrysemys picta ), which can not only spend long periods of time underwater, but can also do so even in aquatic bodies. with very little or almost no oxygen, as in which the upper layer freezes, which prevents gas exchange.

Do sea turtles have gills?

The gills are organs that different animals of aquatic life use to be able to breathe underwater. Nonetheless, these structures are not part of the turtle anatomy, therefore sea turtles do not have gills .

However, there are vertebrates that do have them, apart from fish, such as amphibians in their larval phase, which have similar gill structures that are usually lost in metamorphosis. However, there are cases where they remain in adults, such as that of the Mexican salamander .

How long can a turtle last underwater?

The time a turtle can last underwater can vary, but thanks to its cloacal respiration, in some cases there are individuals that can last much longer than any other lung-breathing vertebrate can. Thus, for example, the Fitzroy turtle ( Rheodytes leukops ) can last from about 10 hours to about three weeks underwater . Another example is found in the painted turtle , which can stay underwater for up to four months .

In general, we can say that a resting turtle can spend between 4 and 7 hours underwater. However, when they are on the move or under stress, they need to come to the surface more continuously to take in air because their metabolic demand increases.

Decompression syndrome is a pathology that originates when an individual submerged at a certain depth ascends rapidly and the atmospheric pressure abruptly decreases , causing nitrogen to pass from the lungs to the blood and form bubbles that cause this syndrome and its complications.

In this way, the decompression syndrome in turtles originates mainly because of fishing when trawling nets are used where they are trapped. Unfortunately, there are not a few sea turtles that suffer from this syndrome and end up dying. Fortunately, there are associations and foundations that are responsible for treating them to rehabilitate them and return them back to their habitat, such as the CRAM Foundation. This foundation is dedicated to the rescue, rehabilitation and liberation of marine animals that are injured, a task that is undoubtedly essential for sea turtles that suffer accidents with boats or are trapped in nets. We can help in this work by supporting the foundation through donations, which can be monthly or specific and of the amount that we want. With just €1 a month, we help a lot!

We have detected that you are using extensions to block ads. Please support us by disabling these ads blocker.